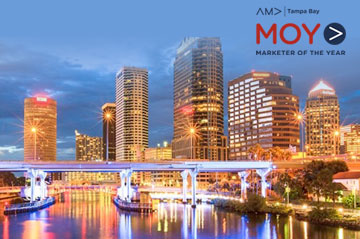 CareerSource Tampa Bay: TechHireGoal
To field applicants into an education program for either IT or Healthcare training. The requirements were that the individual is between ages 17-29, unemployed or underemployed, have significant barriers to employment such as lack of education, lack of skill or incarcerated and live in Tampa Bay.

Problem
Not enough sign-ups in the previous year. No digital tactics were used previously and only billboards, flyers, community outreach, TV, earned media, and radio advertising.

Objective
To achieve 200-300 leads with a CPL < $50. There was also a branding objective that would be measured on an impression basis.

Strategy
To persuade people ages 17-29 to sign up for an educational program in IT & Healthcare industry via digital marketing efforts.

We began with a segmented approach between the two different audience interest groups of IT and Healthcare. For the IT segment we targeted interests related to tech, coding and computer engineering with IT-oriented messaging and creative. For Healthcare we targeted interests relating to nursing and healthcare with appropriate messaging and creative. 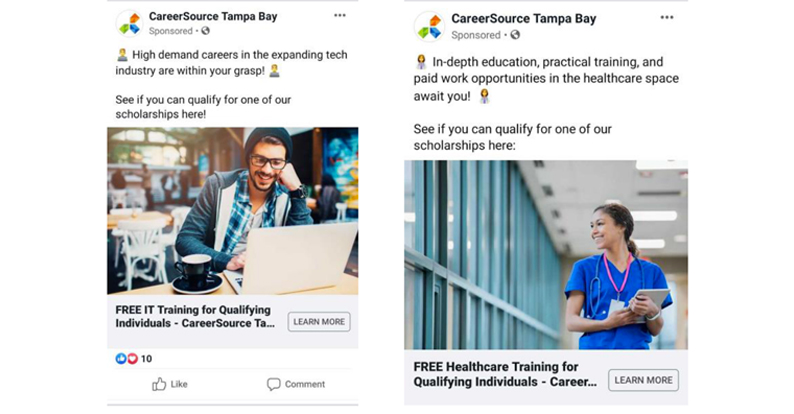 Step 1: To direct these people to the landing page to sign up where there was more detailed info about the program and the necessary qualifications.

Step 2: To change this tactic 3 weeks into the campaign. As Facebook began to drive a lot of traffic to the landing page our retargeting pool was adequately filled. We switched the goal to now capture leads via lead gen form, while retargeting to those who had previously visited the landing page. As expected, conversion rates increased due to less friction between customers and sign-up.

Our approach to LinkedIn was purely to utilize lead gen forms to capture the more expensive leads. LinkedIn allowed us to exclude those who are above the entry-level or intern level position and had less than 2 years of experience to ensure we were hitting our exact target. By layering on interest targeting for Healthcare and IT and delivering different creative to each segment we found success. This specific lane is not as highly sought out as compared to higher-level executives on LinkedIn which resulted in fewer bidders and better campaign performance than projected.

We specifically chose placements that were heavily visited by a younger audience that were ambitious, money-savvy, forward-thinking and aspiring for a career in IT or Healthcare fields. Ads were placed on business publications such as the Wall Street Journal, Investopedia, Fast Company, Life Hack, and many other similar websites. The goal was to build the retargeting pool and increase overall branding in the market. This became more important when FB switched tactics, and this was the only mechanism driving new people to the campaign landing page.

For our PPC and retargeting efforts we utilized dynamic search to ensure high-quality relevant traffic that showed high interest in the landing page. This tactic scrapes the landing page for key terms and matches people’s queries which the content of the landing page to provide high quality leads. We also separated budgets from Mon-Wed and Thur-Sun. As we noticed more activation between Mon-Wed we increased budget in this segment resulting in more leads.

Another form of prospecting display that was targeted specifically to young and techy user base. Reddit allowed great targeting capabilities with very niche communities aka subreddits. We targeted communities in information tech, consumer tech, C++, programming languages and achieved the cheapest CPC of the campaign at $1.11. The goal was to build a retargeting pool with highly interested, high probably leads.

“It’s one thing to get impressions or leads, but we were focused on getting good quality leads based on our target audience and then converting those leads into actual signups for the program. McKay Advertising + Activation was eager to make sure the campaign worked and exceeded our expectations”