Facebook + Google Success, See how we helped the University of South Florida Bulls achieve the highest ticket sales recorded in over half a decade. Horns Up! Go Bulls!


About USF: Bulls lead the stampede to victory. They do not follow. From AAC conference titles to achievements in the classroom to community involvement, USF’s student athletes have a long list of accomplishments to their credit.

Let’s not complicate this: Sell more tickets than the previous year and provide a higher Return on Ad Spend (ROAS).

Remarketing + Gmail: Middle of Funnel
We utilized a data pool of past customers and people who have already visited the USF website to target these audiences and remind them of the offer.  In respect to Gmail, once any words related to USF football or college football appeared in their inbox, we captured that audience.

Search: Bottom of Funnel
By collecting data on those individuals who interacted with the display & remarketing ads, we then targeted those specific individuals with ads prompting them to purchase tickets.

Facebook
Wide > Narrow: Using data on past season ticket holders we made a lookalike audience to increase our target market. This allowed us to target a wider audience with the same behavioral characteristics as those people who bought tickets in the past and are therefore more likely to purchase tickets.

After time, the audience was narrowed to a lookalike audience that must be interested in USF & Tampa and be broadly interested in NFL or college football. This allowed for extremely granular targeting.

Two Tier Approach: Initially we used a static image and drove people to the USF website. This allowed us to capture an audience for retargeting while increasing awareness of the offer. For the second half of the flight we used a video to advertise and drove people directly to the Ticketmaster website to ensure a more seamless process when they purchased a ticket. 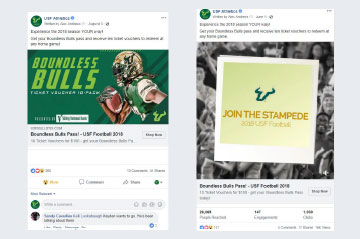 “USF announced it has sold 16,491 football season tickets, more than a 1,000-ticket increase from this time last season and one of its best figures in the last half-decade.”- Tampa Bay Times

The move to the website has proved effective in a multiple variety of ways. It has established a way to purchase with your insurance from the get-go, cash-sales for auxiliary products & Men’s Liberty, and an overall brand facelift. Through our combined results we were able to see the following results from 2017-2018 and track them on a monthly basis.